Just a small update on what’s happening at ACGalaga Studios 😉 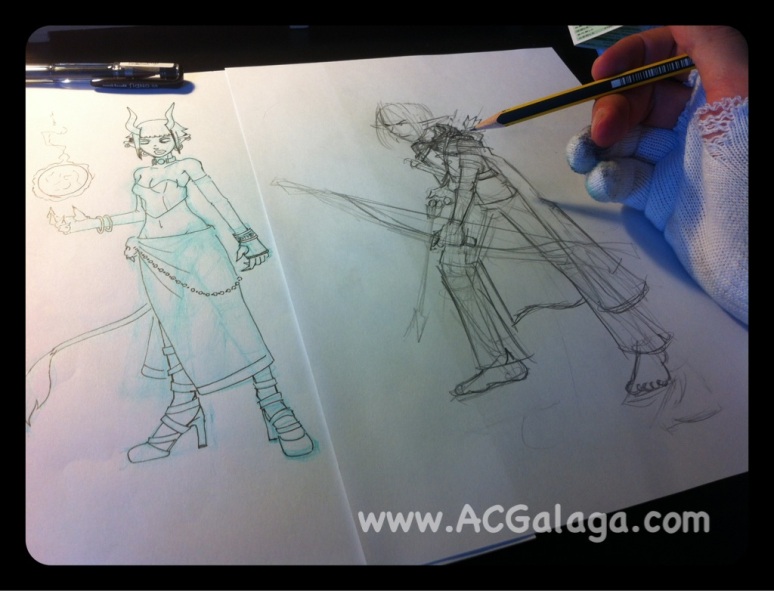 My current Mix Comic is on pause for a little bit as I cram out some character illustrations for my buddy HyveMynd over at Idle Red Hands.

Seems he’s going off to Gateway Con 2013 in August and needs some character illustrations for a game he’s running there. Not sure what system, but I can certainly confirm it’s a fantasy setting. If you happen to be heading out to that con, hit up HyveMynd on Twitter and see if you can get a spot in his game.

The above images are not at all finished. I’m messing around how I’m going to produce the final line art. Both will be light-boxed. The one on the left was sketched in blueline, then a quick pen on top for a little definition. The one on the right was real roughly sketched out in pencil. Both will be traced on the light-box and inked with pigment pens (most likely).

I tried the method on the left first, but switched. I just wasn’t feeling good balance with the blueline pencil. It was so faint and thin (mechanical pencil blueline). I feel more comfortable sketching it out with a somewhat blunt #2 or B pencil, adding bits of detail with a sharper point, then doing the blueline on a new slice of paper via the light-box.

Well, back to work! Thanks for stopping by and keep being awesome!!

2 thoughts on “Update: Some New Work”